How we hit our $30k ARR milestone

Simple Analytics recently passed the $30k in ARR (annual recurring revenue). It has been only a little over a year and I would like to walk you through the important points of our journey together, and where I would like to take it next. 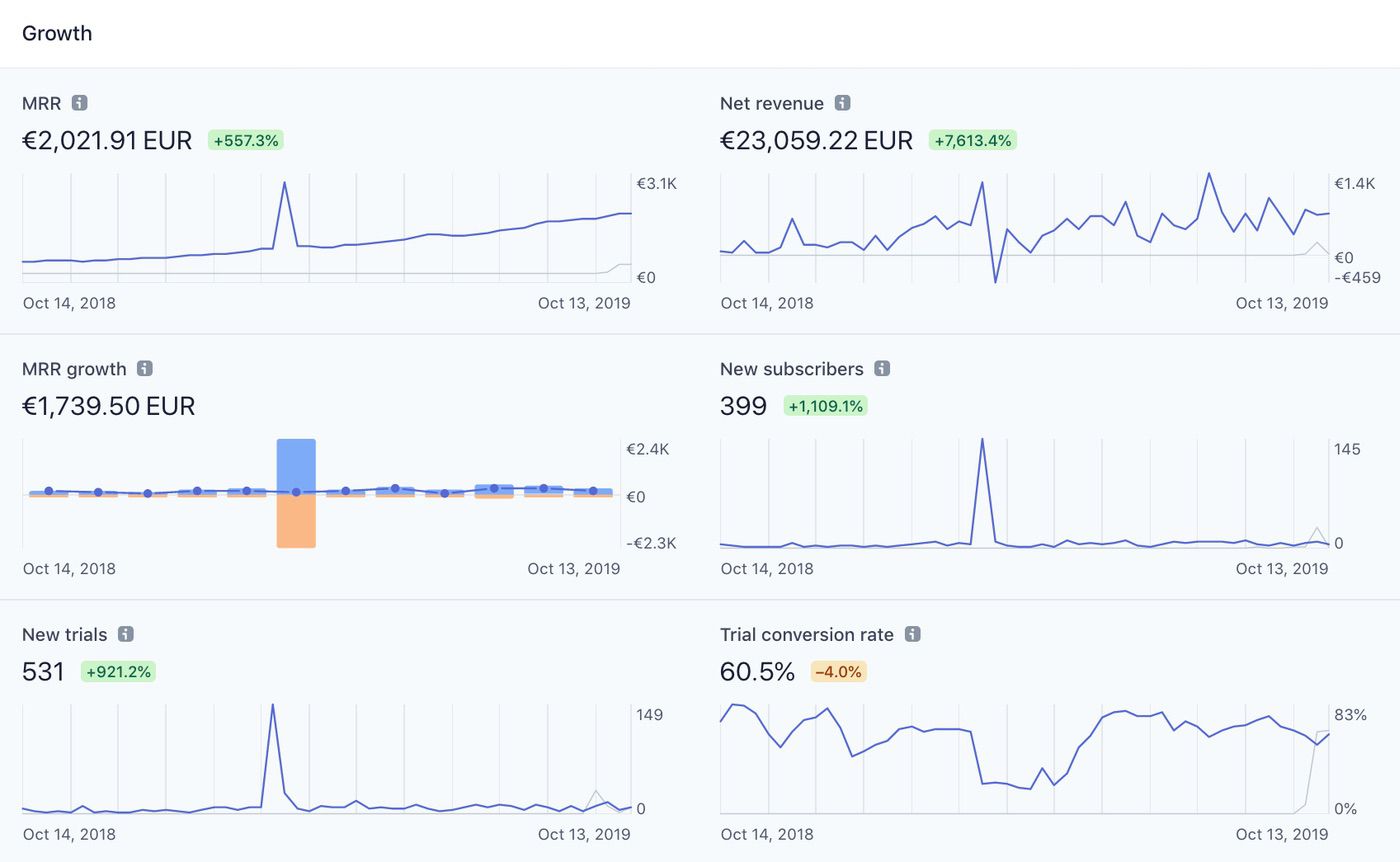 From park bench to Hacker News

In September 2018, Simple Analytics saw traction with its launch on Product Hunt. It ended up #3 of the day and later won the #3 of the Privacy Golden Kitten Award. I've worked on plenty of startups before, but this was my first public launch. It was the first day and I could see it soar/lift off!

Even more interesting, however, was the day after. When launching on Hacker News (from a bench in Amsterdam with Joshua Voydik) it really striked a chord. We reached the #1 spot within the first 5 minutes for at least 9 hours. Let the rollercoaster begin!

Okay, and now what?

The traction was huge. Although initially, not in the ideal way. I offered a paid version from the start, but Pieter Levels suggested via WIP to make it free for a while to get more users. I tried it, but chickened out because I got lots of signups for the free version and none for the paid version.

The Hacker News launch got me my first 30 paying customers and around 800 Twitter followers (before the launch I had around 60). I knew I would be able to get more customers if I knew how to do marketing.

Personally, it's easy for me to program and focus on that. But I also knew that my previous startups didn't make enough money and that wasn't because of the programming but more the lack of marketing effort.

Another good thing to realize is that you can build tools to help you with your marketing. That's why I built a dashboard with all Twitter mentions and SEO keywords like "privacy analytics" "google analytics alternative", ....

The strategy was to respond to the tweets, manually, that appears on Twitter which would also help me in getting my name out there. 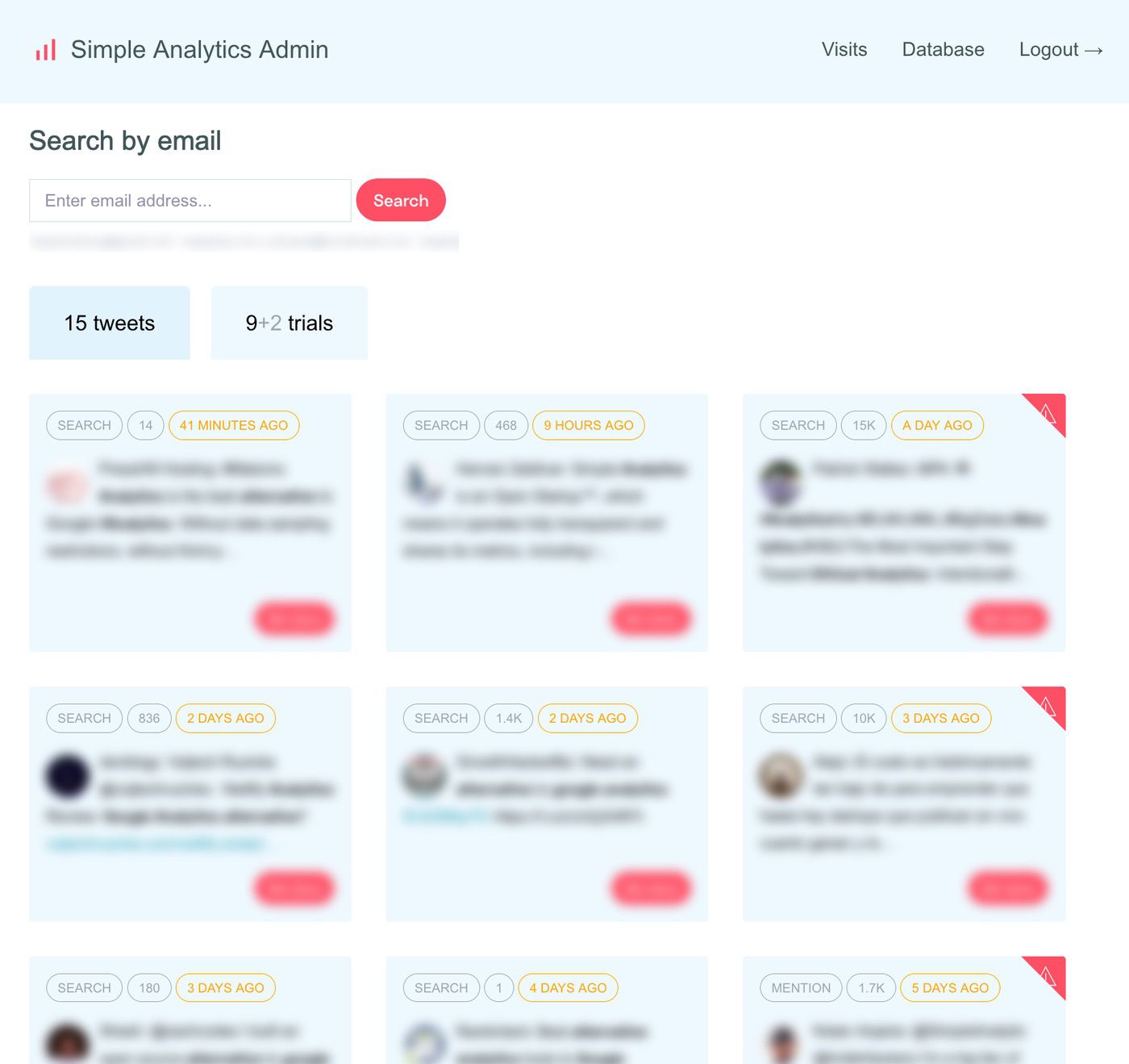 An example to gain more customers was through our docs. I put a lot of time and effort in writing our documentation (thanks Minal C for being my grammar nazi) and I see a lot of referrers from our docs when people sign up. 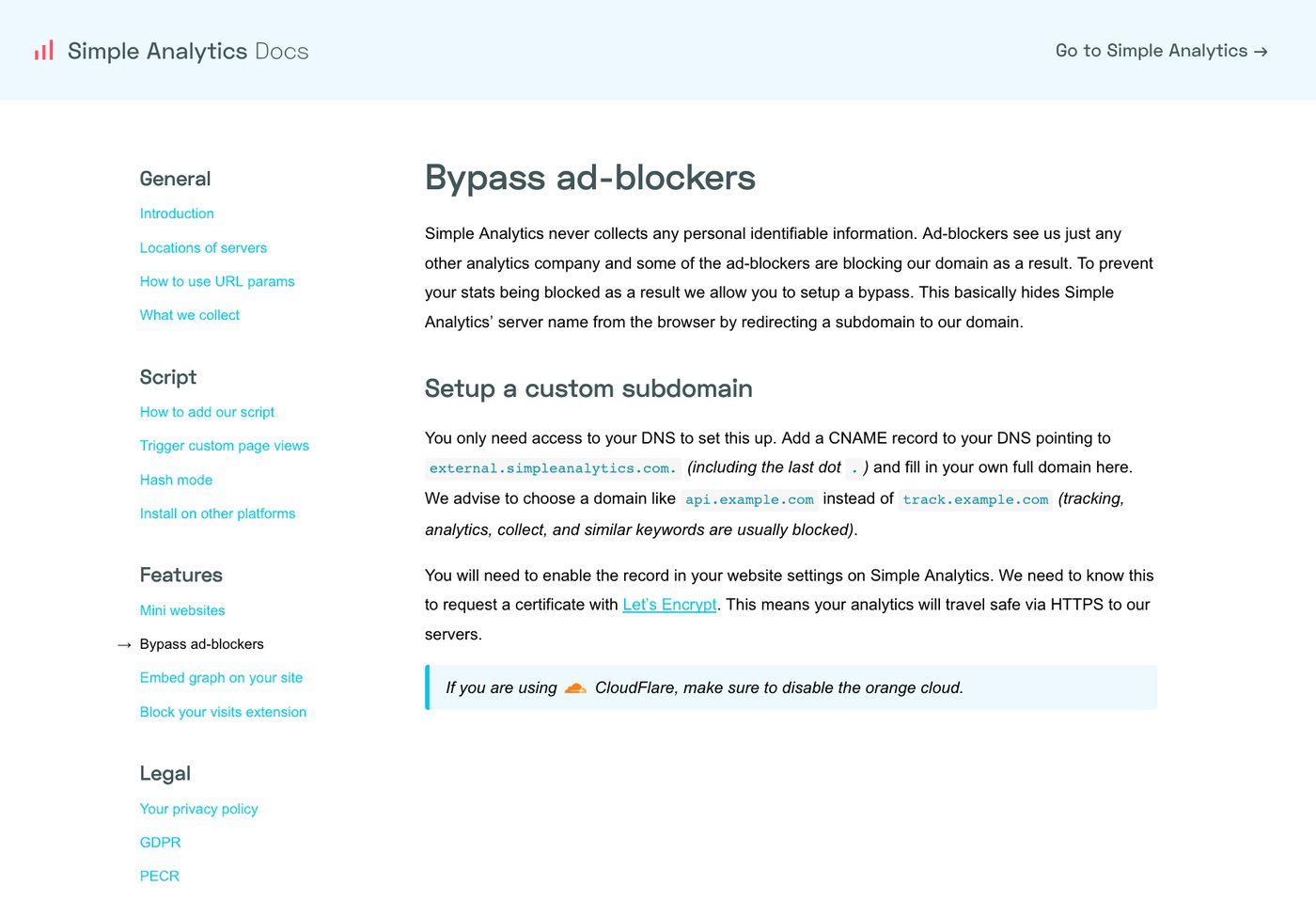 Public dashboards also turned out to be a great marketing feature. Customers can decide to put their stats public and share them publicly. That's a first in the analytics realm and great exposure of my brand. There are plenty tweets out there sharing their dashboard and at the same time they are sharing Simple Analytics.

Read about my Hacker News strategy on marketingexamples.com

Get the basics right

I'm glad I also made some marketing effort at the beginning, even though I didn't even realize I was doing it at the time. Before launching, I worked on the project for 2 months. This was from first idea to MVP (see this page and scroll down to see the first screenshots). The MVP was quite simple: Show a graph of page views and a list of top pages, referrals, and screen sizes. I got most of my pre-launch feedback from people in WIP.

By sharing my process I realized there was some traction: the first samples of Simple Analytics were introduced to the world. I'm not the best with design, so at that moment I also hired a designer to create some pages for the app. That's not very MVP like, but I didn't depend on the money I would lose. The same goes for the promotional video on the homepage (although that was through friends) which was a lot of work – but also a lot of fun. These small steps – sharing the process, having a simple MVP, good video, gather feedback early – very likely played a part in the success of Simple Analytics' initial launch.

But hold up. A funny video won't earn you a place on the market, right? The analytics space is dominated by huge players. So the fact that Simple Analytics became a hit was unexpected. I stepped into a niche by picking two different perspectives that meant a lot to me: privacy and simplicity. The first has intrigued me since I started programming at the age of 15, and the latter is something that I got from my dad. They are rooted deeply in me and I think that's one of the reasons I will always be passionate about my startup.

The fact that those perspectives would help me tremendously in comparison with my competitors, was something I did not expect. For example, Google who started getting a name for being too greedy for data they don't need was a blessing in disguise. Analytics companies have an urge to collect as much data as they can, which usually comes with a horrible interface.

Simple Analytics doesn't have that problem because it's only collecting the needed information so we are still able to display it in a nice clean interface.

Some people have inquired about the churn rate. Here are some numbers with more info compared to simpleanalytics.com/open page. 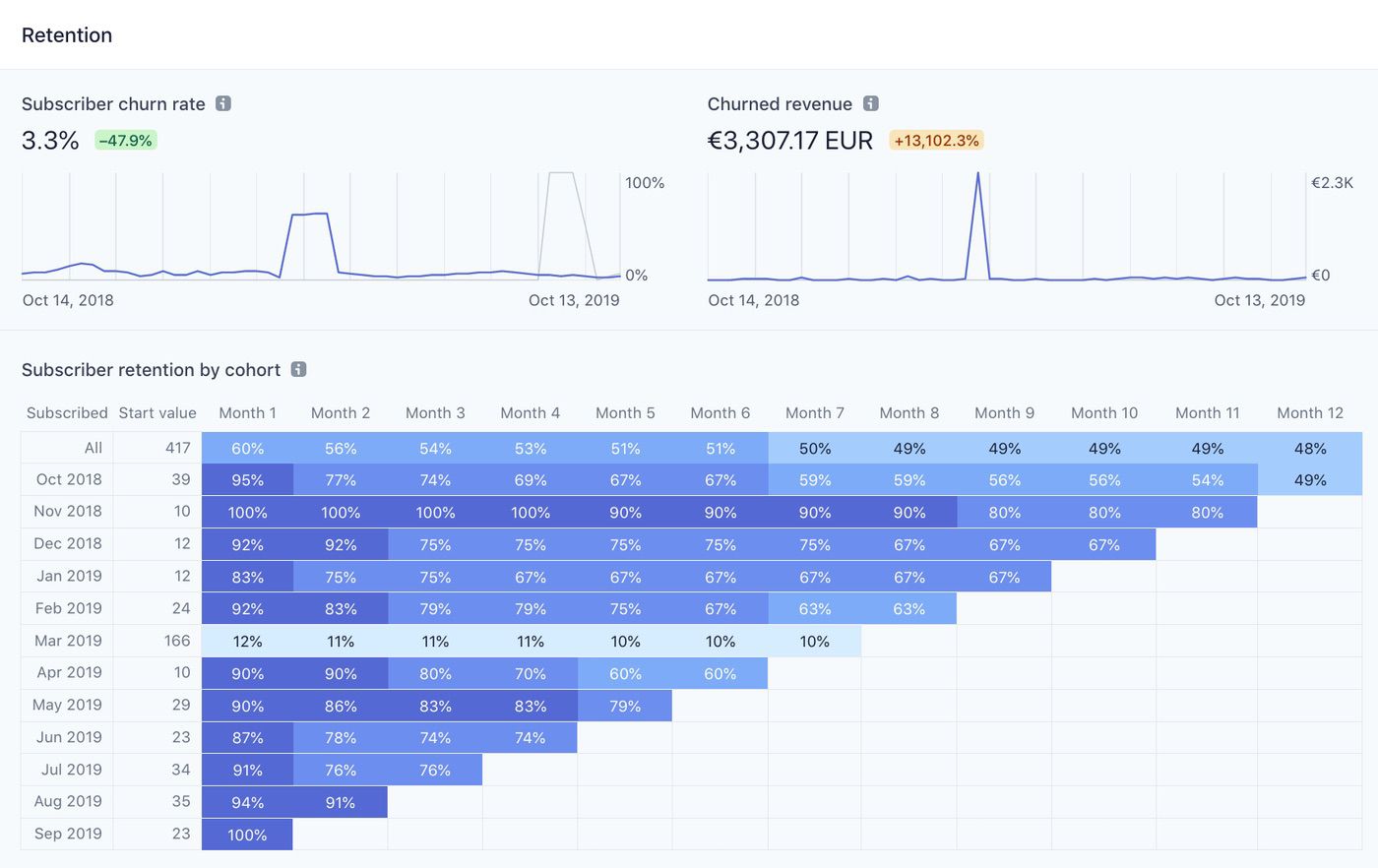 To put this success story in perspective: it wasn't all butterflies and rainbows in the last year. Points of improvement and feedback pop up everywhere. I set up lots of ways to gather feedback:

Added a link in top navigation, manually tweet a welcome tweet, redirect to feedback page on many pages, a live chat – all thanks to Şamil Karahisar, being active on Twitter, a Telegram group with power users, a slack for big features, ... 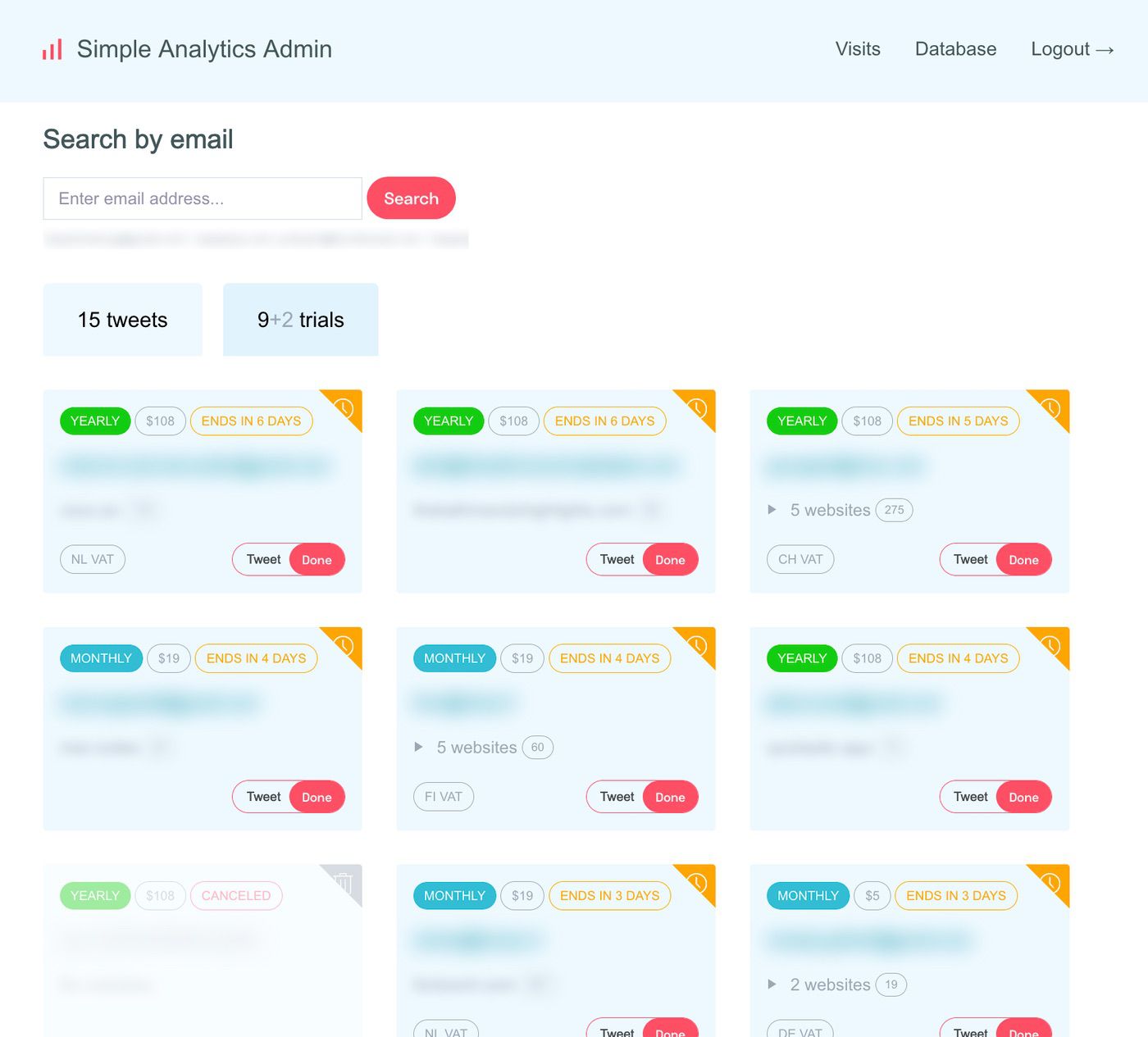 But with all this feedback and feature requests it feels like I'm never done with my startup. There are lots of people building a SaaS startup to find their passive income, but it's hard work (and probably never ends). For me there is this pressure from my customers to build all those nice things they want, which keeps me focused but also overwhelmed. I didn't expect this and I'm not sure if I found a way. For now it seems to work to have focused weeks, just focus on one feature/theme and get that done in a week.

This all wasn't possible without the feedback and motivation I got from WIP and my first customers! It comes with pressure but without I would go nowhere, thank you 🙏

For the next year I want to focus on enterprise clients. It's a market that really needs a cookie/IP-less solution when GDPR and PECR are enforced. Simple Analytics is the only platform that is compliant for that future.

I want to build more tools for bigger users like downloading Excel sheets, digging deeper into the data without making the dashboard more complex, unique visits, and way more...!